With the release of Ivory II Grand Pianos, this world's most popular compilation of virtual grand pianos has become even better! Ivory II now offers a significantly expanded sound set with almost twice as many velocity layers as well as the new Ivory II DSP engine with "Harmonic Resonance Modeling", which makes the natural resonance of the strings extremely realistic. With Ivory II Grand Pianos, Synthogy rises to the top of the podium in sampling and synthesis technology. 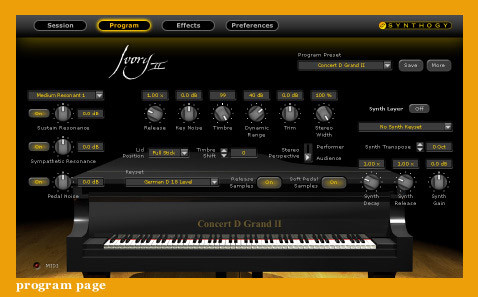 The feeling is incredible! From the toughest fortissimo to the softest, almost breathable pianissimo, Ivory II Grand Pianos begins to breathe under your fingers and lures the best of every pianist, as does a first-class real instrument.
A whole host of new functions, especially for pianos existential, have been packed into the Ivory 2 engine. The “Sympathetic String Resonance” function deserves special mention. After long attempts to approach the difficult to grasp characteristics of a real concert grand piano, Synthogy has found a unique way that realistically reproduces both the complexity and the subtleties of the resonance behavior of strings and sound body.
“Harmonic Resonance Modeling” is a completely new technology that does not simply trust simple samples, waveforms or audio recordings. On the contrary, struck notes that communicate harmoniously with each other stimulate the creation of complex overtones for all sustained tones in the same way as it happens with undamped strings in a real piano. The result is an unprecedented naturalness.
Ivory II also has solutions for many synthogy customer requests on board such as Half Pedaling, Lid Position, Pedal Noise, and Tuning Tables to convey greater expressiveness and game control.

Other special features are timbre shifting and a parametric EQ, new synth layer controls are a powerful tool for tailor-made piano programming and sound design.

Of course, the legendary Ivory pianos are particularly important to Ivory II. Every Ivory piano has been further developed and refined: more dynamic levels (up to 18 per piano), additional soft pedal samples and even more release samples are available.
Synthogy's years of experience in the development of virtual pianos combined with the protected "timbre interpolation" technology is a guarantee of the highest naturalness and unbeatable joy of playing.

This product requires activation!
This can either be done on your computer (without additional hardware) or alternatively on a separately purchased Ilok USB dongle . The iLok USB dongle can be plugged into any computer in order to use the protected software on several computers.

To activate the product, you need an internet connection on any computer and a free user account at www.ilok.com.