The oud is considered to be one of the oldest musical instruments in Arabic music and in fact it plays a central role in the musical tradition of the Middle East. Although the origins of this instrument are uncertain, the oud's popularity spread across the Mediterranean, the Middle East, and North and East Africa, where it is still popular today. In the west, the oud is probably best known as the forerunner of the European lute.

Like the Arabic Oud, the Arabic E-Oud Library was created in close collaboration with the renowned musician and oud virtuoso Bassam Ayoub. Bassam Ayoub played and recorded all of the variations , with the main focus on achieving an authentic sound in both melody and rhythmic accompaniment. The built-in pickup gives the characteristic sound of the oud its very own note, which makes this instrument the perfect link between traditional oriental and western sounds.

Arabic E-Oud offers a staggering number of 25 articulations with up to 20 velocity layers and 16 round robins and brings one of the oldest stringed instruments to life under your fingertips. The versatile sound spectrum can enrich any kind of music, whereby the integrated microtunings make the heart of every professional maqam interpreter beat faster! 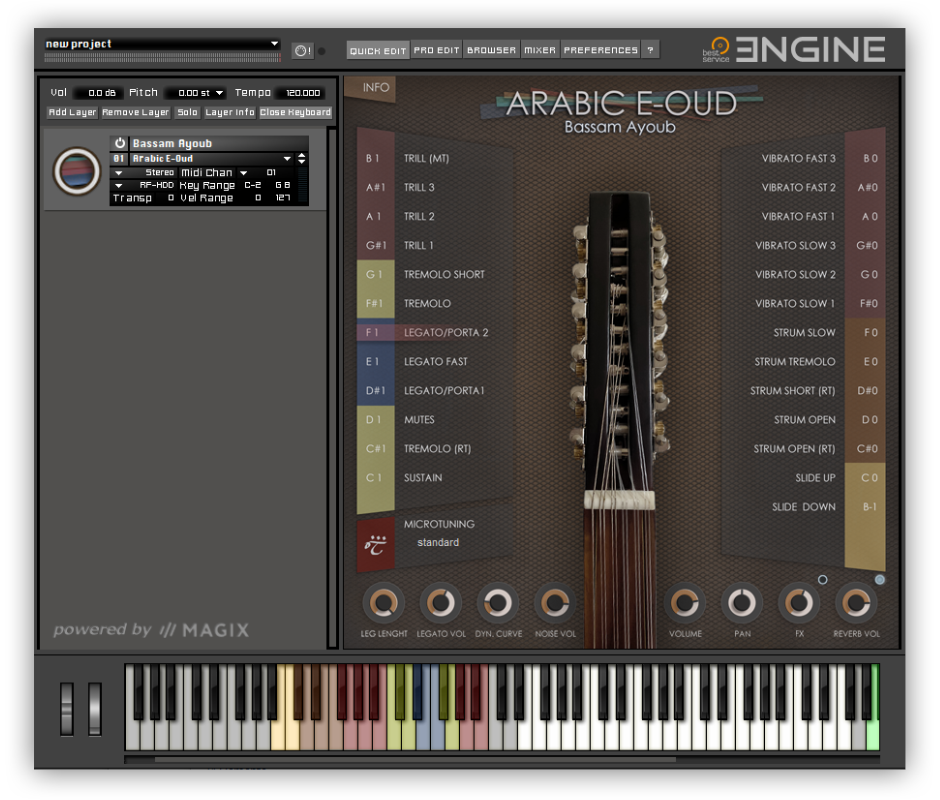 Arabic E-Oud transports the sounds of the Middle East into the DAW-supported production environment. The carefully programmed surface of the engine player makes working with the library easier, so that you can be inspired by the sound of the electric oud and develop your creativity freely.

The user interface gives you access to the most important and most widely used microtunings of oriental music: Bayati, Rast, Saba and Seka. Each tuning offers two variants (Normal and Syriac Church) and the free choice of root.

The green midi song keys above the play area play short midi sequences that demonstrate the numerous playing possibilities of the Arabic E-Oud.

Born in Syria, Bassam Ayoub, a musician and singer, traveled with various bands to many Arab countries and Europe. As head of his recording studio in Wiesbaden / Germany he worked with countless artists as well as with well-known manufacturers of oriental keyboards and expanders such as Korg, Farfisa and Limex. Arabic E-Oud is the next step on his hunt for the perfect virtual oud, which captures the unique sound of this instrument, but also conveys a special playing feeling.